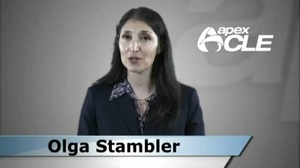 Olga Stambler graduated Magnu Cum Laude from Brandeis University in 1992 with a Bachelors of Art in Political Science. She attended Fordham University School of Law and graduated in the top 20% of her class in 1995. Olga was admitted to practice law in the State of New York in 1996 and in the State of Illinois in 1999. She began her legal career as a corporate attorney at Dewey Ballantine in New York City and then at Bell, Boyd & Lloyd in Chicago. She has handled many aspects of Domestic Relations litigation including child support, maintenance, custody and visitation issues and division of complex marital estates. Olgaâs corporate background is a tremendous asset in assessing, negotiating and resolving financial issues. Olga has recently negotiated a successful settlement relating to the division of marital estate worth over $15,000,000. Olga is trained in Collaborative Law. She is a fellow of the Collaborative Law Institute of Illinois and a member of the Association for Conflict Resolution, the Collaborative Practice Professionals of Illinois, and the International Academy of Collaborative Professionals.