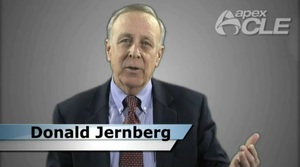 Mr. Jernberg graduated from Vanderbilt University with a Bachelor of Arts degree, magna cum laude and Phi Beta Kappa, in 1969. He graduated from Northwestern University, cum laude, with his law degree in 1972. Mr. Jernberg attended the University of Alabama from 1976-1977 and is now an associate professor of law. For 12 years, Mr. Jernberg has had his own law practice, Jernberg Law Group, which focuses on insurance, litigation, and general corporate matters. Previously, Mr. Jernberg worked with Oppenheimer, Wolff, and Donnelly to help establish the Chicago office of the 350 lawyer firm. He also worked with Isham, Lincoln, and Beale and established their environmental insurance coverage practice. Additionally, he worked with Williams and Montgomery which focused on insurance defense and insurance coverage practice. He is licensed in Illinois, United States Supreme Court and various federal district and circuit courts. Mr. Jernberg is the founding member of the environmental law committee of the Torts and Insurance Practice section of the ABA. He was appointed to ABA Blue Ribbon Committee in Discovery in Major Environmental Coverage Litigation and he is a member of National Arbitration Association panel of arbitrators, certified mediator and member of Cook County panel of major case arbitrators. Mr. Jernberg is also the author of approximately 30 articles in the area of insurance coverage and dispute resolution. He is a frequent lecturer on insurance coverage matters, including major addresses at the national conventions of the CPCU Society and the Casualty Actuarial Society. Mr. Jernberg is a member of the North American Reinsurance faculty that provided annual week long classes for insurance claim professionals.