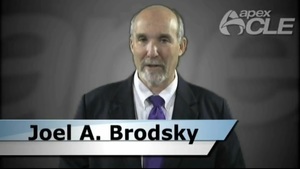 Joel A. Brodsky practices law from his office in Cook County, Illinois, as well as in all courts throughout the State of Illinois. In the past 28 years Joel has been a partner in several law firms, both large and small [3]. Prior to 1996, Joel A. Brodsky was employed Stone & Hughes a medium size law firm which specialized in commercial law. Mr. Brodsky was involved in all areas of the practice, including the litigation of matters in which his clients were large financial institutions and commercial lenders. Since 1987 he has concentrated his practice in the areas of criminal defense and complex commercial litigation. Mr. Brodsky has tried numerous felony and misdemeanor criminal cases before both juries and bench. Further, Mr. Brodsky has represented clients in both Illinois State Court and Federal Court in commercial litigation matters ranging from trade secrets cases, to legal malpractice, to banking law violations. He has also represented clients in divorce, custody and visitation matters where issues such as religion, junk science evaluations, and visitation interference have been at issue. He has also handled a number of appeals to the Illinois First District Court of Appeals and the Seventh Circuit Court of Appeals. Joel A. Brodsky was born in Chicago on July 24, 1957, and has resided in Chicago his entire life. He attended Drake University in Des Moines, Iowa, where he earned a Bachelor of Arts degree, Cum Laude. He then attended DePaul University School of Law in Chicago where he was awarded his Juris Doctor degree in June of 1982.